<img height="1" width="1" style="display:none" src="https://www.facebook.com/tr?id=1525762147722832&amp;ev=PageView&amp;noscript=1">
We are a leading provider of digitalization and cloud solutions in the Nordic countries.
Life at Innofactor |

I need your help. In an utterly pointless personal challenge, I am trying to set a completely unofficial and totally unverified world record for different ways of commuting to the office.

I began with the simplest form possible, a nice walk in on a sunny morning. There is a path along the water that leads in front of the Microsoft office, past Rovio and straight to the Innofactor Campus front door. This went well, so I followed it up with a run along the same route.

Of course, there are good public transportation methods. I took a bus from near my front door. When I was late one morning, I took a taxi, and when the metro station eventually opened a couple of hundred metres away, I ticked that off. 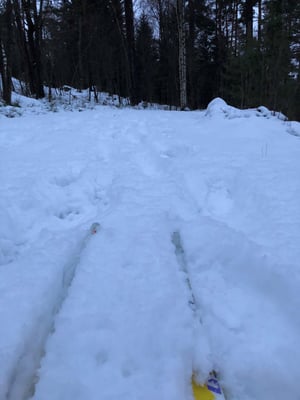 The relatively smooth path allowed me to try to skateboard in. That went fairly well except near the old Caruna building, where my board trucks nearly shook themselves apart on the tiling. A different route by rollerblading through the building site known as Tapiola was even trickier, with lethal uneven slabs and booby trap pebbles.

I took a car quite a few times too, but my preferred method became the bike.
I managed to cycle in all through the winter, enduring sideways snow and the lethal ice hidden under drifts.

But winter opened up new possibilities. Being English/Australian, my experience of cross country skiing before moving here was very limited. By limited, I mean absolutely none. I managed to get hold of a really old second hand pair of skis and set off commuting over the frozen sea, wobbling along jerking uncontrollably the alien in the body suit in Men in Black. I eventually made it to the office a sweaty mess, taking over 20 minutes longer than just walking in.

I tried snow kiting, strapping a snowboard to my feet and using a power kite. Unfortunately this didn’t work very well as despite the name, the kite wasn’t powerful, but I’m on the lookout to borrow a bigger kite next winter and tick that one off.

When spring arrived I borrowed one of the 4 kayaks Innofactor has for the use of employees. With a colleague Sergey, we managed to kayak to the beach nearest our homes after work, then kayak back in the beautiful still morning.

I managed to windsurf home, scraping under the Lansiväylä bridge by a few centimetres. Next up was a SUP, and I am considering trying to row or swim in while the water is warm enough. I have access to the company fishing boat, and paddling a surfboard is on the cards soon. I’m up for any other method if anyone has equipment I could borrow.

So do you own a horse or donkey? Water skis? A sailing boat? A fully equipped dog sled? A jet pack? Do you enjoy watching someone comically attempt a new sport with dangerously little experience? Contact us and let’s commute together!

Simon helps customers to build beautiful, fast and functional websites. He works in both the front and back end, specializing in EPiServer, Vue and ASP.NET. He plans to suck less at cross country skiing this year, and is on the lookout for a friend with a seaplane.

Back to all posts
20.9.2018
We are a leading provider of digitalization and cloud solutions in the Nordic countries.